The citizens of Johnston came out in a democratic voice yesterday and denied the school board the ability to raise $51MM in debt via municipal bonds to build a new high school.  Participation in this process showed me two views of my community that I’d like to share here, but first a brief intro to the project.

The Johnston public school district is growing and is projected increase by 1100 over the next 8 years. 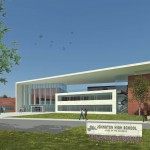 After the past decade of improvements to elementary and middle schools, the district turned its attention to the aging high school, built in the 70s (when population was growing from 270 toward 2500 per the 70s and 80s census’), already overcrowded and aching for support.  After much consternation, the district presented a proposal to the community via public townhalls, participatory meetings and volumes of data.  This proposal, though not perfect, was a result of community interaction and changes were still possible if this vote had been approved.

The tombstone of the proposal is still available.  I was glad to attend two of the four public meetings and had my questions about the finances answered and voted yes on the proposal on 9/11/12.  Apparently a majority of Johnston residents who voted agreed this was important, but the votes weren’t sufficient for passage (the proposal received 55% support vs the 60% needed).

The Johnston that is engaged and one that isn’t….

I was able to attend two of of the four public sessions on this issue.  Scanning the Johnston middle school auditorium both times, I saw about 100 people in the room  comprising district employees, Principals, teachers and parents.  I saw the city Mayor, press and commercial partners.  In those two meetings, about 400 (eyeballed, not scientific count) of the city’s 17,550+ residents heard the case for (or against) the new project, the school and its cost in these four meetings.  Even if twice that number saw the detailed materials for the school on the district website, that represents less than 10% of our city engaged in a fairly important local issue.  Not very representative of a democratic society.

The east vs. the west side of Johnston

I was glad to hear comments from residents of the old Johnston – the one from 70s and 80s when the city was still <2500 people.  That Johnston is no more.  It will never be that Johnston again.  The complaints from the historic neighborhoods of Johnston that the new sections are causing this need for growth were interesting, but irrelevant.  Of course the new neighborhoods cause growth when new people move in.  The new neighborhoods are high valued properties paying their fair share in higher property taxes.  The formula for taxes is linear — 99 cents per $1000 in valuation.

The affected vs. the unaffected Johnston

WHO Radio asked me if I’d support the bond issue if my kids weren’t currently enrolled.  Of course I would — we grow as a community of residents, workers and corporations when we see an investment in the future.  The small and large corporate citizens of Johnston don’t exist here because this land is cheap – they exist partly because there is (was?) a higher focus on education in our community.  They see their future workforce learning in our K12 schools.  Their employees reside in our neighborhoods.  Though I wasn’t a product of Johnston’s school system (growing up in India makes it hard to ride the school bus across 12 time zones), I understand that we as a community invest in the WHOLE community.  If we expect to pay for every service received AT the time of receiving it, we need to plan for and begin a transition to a fully privatized school system or get educated in the art and science of homeschooling.

But we also believe in something called citizenship – a word at the very heart of our founding, at the very essence of our democracy; the idea that this country only works when we accept certain obligations to one another, and to future generations.”
–President Barack Obama, September 2012

About 4800 people voted on Sept 11. 2012 in this election out of the 17,550+ residents of whom about 12,000 are of voting age (data from US Census).  About a quarter of the city’s population participated in setting a direction for the city’s non-voting population.  That non-voting populace is 100% our future that will now receive their education in:

Or, perhaps some of the families will begin contemplating a move to Ankeny, Waukee, SE Polk and other school districts where the citizens have approved an investment in education.

11 thoughts on “A Tale of two Johnstons”